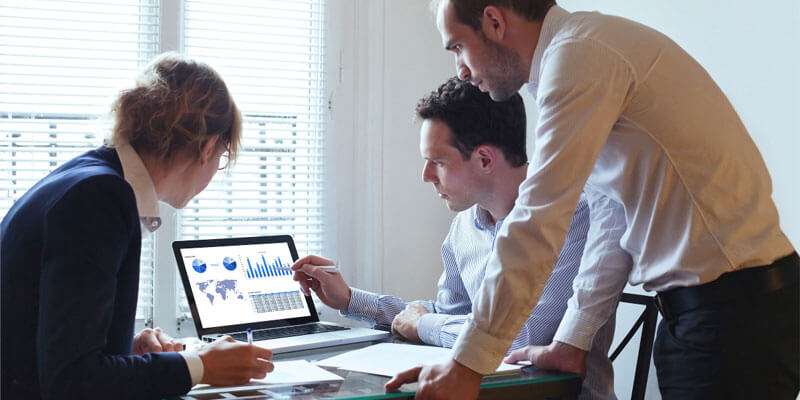 rexx systems: “Arne, you’ve been an expert for quite a few years now on target agreement systems, variable remuneration and performance management in various industries and have also been advising, training and writing published books on these subjects. Is the concept to lead employees with targets and measure them accordingly still contemporary in these times of digitization, disruptive markets and Generation Y?”

Arne Prieß: “The discussion around the pros and cons of TAS has been going on for a number of years despite the influences you mentioned. I often experience this discussion as a political one. The focus is usually on the willingness of the management to lead with targets, plan the future ahead and align their organization and every person in it – as well as bind part of the payment to it. Even if this is actually one of the original management tasks, in my position as a consultant, I regularly meet managers who act very operatively and see strategies and targets as a ‘bad thing’. If you don’t have strategies and targets, you will have a hard time pursuing TAS. If the same managers are then being forced from the outside to implement these management systems, for example by shareholders or parent companies, then these systems deteriorate to rituals, money distribution mechanisms and unloved compulsory exercises, which they want to get rid of as soon as they can.”

Learn how your company can profit by using a target agreement system in the current white paper – free download!

rexx systems: “Tjalf, clearly this discussion includes the implementation of software like the rexx systems’ Target Agreements module. As one of the top experts for topics like digital and social media, who’s also advising our customers to master digital transformation successfully, what’s your take on this?”

Tjalf Nienaber: “Of course, I agree with Mr. Prieß, especially regarding the strategy issue. However, the world is as it is.

“Management culture has changed and will change further.”

Arne and I have written the book “Strategic Human Resource Management” along with other colleagues, which focuses on this topic in a detailed fashion. In my opinion, there is a new breed of managers, coming from Generation Y etc. This generation redefines leadership for itself, thinks in other cycles, has other strategy models. This means that consultants have to pay more attention to this culture and adjust systems accordingly and not the other way around.”

rexx systems: “How would you reply to these managers, if they said: ‘Our targets are changing quicker than the weather, so why should we bother with target agreements?’”

Arne Prieß: “I would reply: Exactly, and now it is hailing and snowing outside, instead of warm sunshine, so give your employees a new target, if possible. Adjusting to adverse conditions would be a good idea.”

“The quick response to changes, adjusting the plan to optimize results enables organizations to stay on course, even in bad weather.”

Furthermore, as every employee survey highlights, employees tend not to be happy when they are not given any orientation. You just have to look at the Gallup studies. From my perspective, good and top-performing employees are the biggest advocates of TAS. However, it is sad that their voices aren’t being heard especially when all companies are imploringly looking for pearls like these in this ‘War for Talent’.”

Tjalf Nienaber: “In these ‘agile’ times, there is obviously no point in pursuing targets, which the company cannot reach. On the other hand, there is no point in ‘doing this’ one minute and ‘doing that’ the next. Orientation and stability are important – especially in this fast-moving age. My advice:

But the actual dilemma is that for many, TAS feels similar to e-learning in the ’90s – old-fashioned, bumpy and no fun at all. Every top athlete knows that you can’t reach your target if you don’t have fun and ambition in what you do, so the companies have to start here. Ask your employees what really motivates them and why they want to reach their targets. Maybe some would like to go on a long vacation or perhaps some can be incentivized to work from the home office in the future. Ultimately, only motivated employees are likely to work gladly and are determined to reach their targets.”

rexx systems: “In your experience, what is the most common mistake being made when implementing TAS?”

Arne Prieß: ““Especially in view of my first statement, regarding the aversion of some managers towards TAS, the most common mistake in the course of the implementation training is focusing too strongly on how the system is supposed to run. Explaining why managers should use it, is often neglected and thus no intrinsic motivation is being created. This typically leads to a situation where a system that is actually very useful, turns instead into a prescribed and annoying ritual. That’s why my management training always contains a fair share of talking about the advantages of Management by Delegation and Objectives. I explain to managers, how motivated and independent employees can become, when they know, what their job is and what achievements are being expected from them. This is when the penny usually drops and the use of the system, hopefully including existing modern IT systems, becomes an important and non-neglectable element of manager tasks.”

Tjalf Nienaber: “I totally agree with this. In my experience, these undertakings often fail, because some concepts get developed and rolled out, no matter what, without including all relevant parties involved. No real communication beforehand leading to no motivation whatsoever. To understand an implementation as a real opportunity – or even as a change. One of the fundamental problems is if this approach isn’t being set as a good example from top-down. Managers are also supposed to be incentivized by their targets – which can also be set bottom-up as well, by the way. And so…

“Why not let employees specify targets for their superiors?”

Sure, a company should not become some kind of pony farm, but respectful interactions with each other can have a positive impact when it comes to target specifications. Regarding the software implementation: first of all, the concept, which should also work offline, has to be finished and tested. Form following function.”

rexx systems: “Let’s talk some more about, what could go wrong. In your experience, what is the biggest mistake being made, when using TAS?”

Arne Prieß: “When I audit existing TAS, I often find, that the predominant number of target agreements haven’t actually agreed on targets, but tasks. It is often described, what should be done, but not what the outcome at the end of the task is. That’s why I encourage and coach managers to describe results in the future, like they have already been finished. It’s only when you describe completed conditions, a photograph of the finish can appear in front of your mind’s eye. Management by Objectives is supposed to leave a clear path towards the target, so that employees and teams can introduce their expertise, when they take the road towards the target.”

Tjalf Nienaber: “In my experience, there is a danger that it can become boring routine again. Modern day creativity often gets left behind and sure, using paper and Excel isn’t contemporary either. An innovative target agreement system, like the one by rexx systems, is always recommended. If I was a top decision-maker at the company, this would be my ‘must have target’, directed at the HR manager.”

Learn how you and your company can profit by using a target agreement system in the current white paper – free download!

3. Reasons for a target agreement system

rexx systems: “Are there any other reasons to use TAS, besides the ones you already mentioned – motivation and orientation?”

Arne Prieß: “Thanks to neuroscience, we know today that good and clear targets in your mind can set an important impulse to release dopamine. This is a chemical in the brain, which has been scientifically linked with employee motivation, to work boldly and with dedication to their job. Having demotivated and performance reluctant employees can’t be fixed by giving out the next expensive benefits at your company’s disposal, in my opinion. Maybe using targets is the way to go and to earn your employees loyal respect.”

Tjalf Nienaber: “No targets and no plan typically lead to no success. Digital or not.

“If you don’t know the port you want to sail into, no wind is the right one for you.”

goes an old, well-known German saying. So again: take control, motivate your team and cast off. This will give you and your employees a good sense, that the company knows, what it is doing.”

rexx systems: “Last question to our experts: what would you recommend to your customers, if they ask about IT systems for TAS?”

Arne Prieß: “In these times of digitalization, I absolutely recommend to electronically support the work process, the necessary documentation, but also the usability of data for other HR processes. In ‘4.0-times’ it would be virtually a regression back to the stone age to not use these possibilities. But I also advise, that the technology and its operation should never be the center of the process. Communication, target quality and interchange about the future and what should be accomplished should be the main aspects. IT systems should pose a relief and offer structure, but never be an end in itself.”

Tjalf Nienaber: “Additionally I would get them to ask ‘why’. The implementation of an IT system has to be reinforced with targets as well – and this includes all parties involved. It’s not only an issue for the IT, management and HR departments, but also for the employees and the workers’ council, amongst others.”

rexx systems: “Thanks a lot for the interesting talk.”